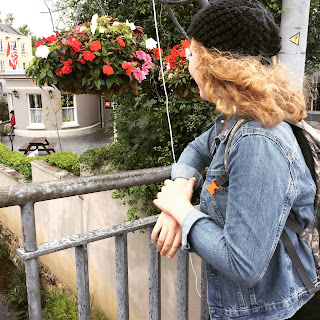 Greetings faithful followers. In the wake of my brief hiatus from writing, I'm going to take a moment to discuss the not-so-glamorous side of studying abroad (or going away to school in general). Namely, the toll it can take on one's mental health. Months ago, they warned us at orientation about the dip in mood that often comes with a new environment. As an introvert, heavy social interaction is something I've learned to manage by allowing myself time alone to recenter. But when my nice quiet room is an ocean away along with everyone I've grown comfortable with, the stress of constant contact with strangers can wear on the nerves. Freshly relieved of the demands of a job, one can find it easy to retreat into a hermetic lifestyle - spending days watching unhealthy amounts of television, only leaving the house to scurry to and from class. But of course, this isn't what I came abroad for! I'm wasting my time! And a pinch of guilt is sprinkled atop a dash of anxiety to simmer in a stew of depression.

I've found that the best remedy for this is to first acknowledge that it's a natural reaction, and nothing to feel guilty about. Organisms take time to adapt to new environments, and stress is a major factor in that process. This is why we get homesick. I miss my car. I miss my friends. I miss my quiet room, and my surround sound speakers, and all the things I associate with feeling less stressed. It effects my mood and my motivation to write and socialize. 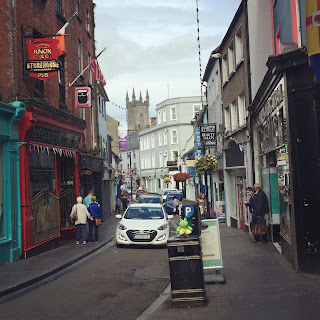 After acknowledging what's happening, the next step is to break the cycle by doing the opposite of hiding. I feel better when I force myself out of my room and talk to my roommates (turns out they're good for way more than just collecting traffic cones!), or go out to the pub with some friends. Or at the very least, clean my room - a clean living space is a clean mental space. But the best cure so far has been to plan my trips for the semester. It's hard to be homesick when you're excited about exploring a new city and remembering why you traveled in the first place!
Speaking of travel, my tales from beyond the streets of Limerick have been a long time coming. I have managed two excursions, one day trip to Ennis and an overnight trip to the Aran Islands sponsored by my study abroad program. Both offered their own unique flavor of Irish culture. 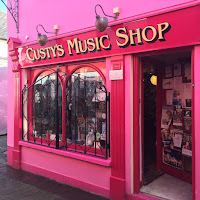 Ennis began as a trade center in County Clare about twenty five miles northwest of Limerick City. Now it is a modest sprawl of narrow streets lined with coffee shops, gift shops and pubs. One of these such shops is Custy's. An alarmingly pink storefront draws the eye and gives way to a charming music shop from which I purchased a ukulele to learn on during the semester. I have appropriately named the instrument "Custy."
One of my traveling companions with a prior knowledge of the town insisted on a visit to Suas Coffee shop on O'Connell Street. Serving a tasteful brunch menu and an espresso fit to impress even an amateur palate such as mine, it is a must for any coffee purist. I personally preferred the landmark attractions the city had to offer, such as the Franciscan Friary. It dates back to 1180 AD, creating a stark contrast to the fresh, touristy aesthetic of the town. Though the friary itself has been converted into a museum of sorts with signs indicating the age and role of various parts of the structure throughout history, the cemetery is still available for the burial of clergymen upon request. It's stone spires are visible from many vantage points in the city, towering far above the rooftops and making for some picturesque scenes. 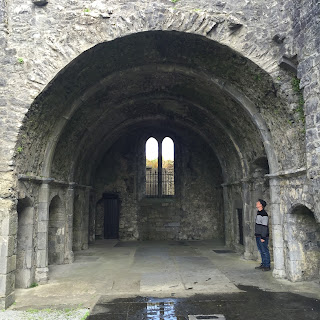 My favorite experience in Ennis was dinner at Cruises pub. This was admittedly not due to any unique qualities of the pub, but because exploring had worked up a serious appetite. It was here that I first encountered the Irish propensity for striking up conversations with strangers. While I ordered my meal at the bar, I bumped one of the occupants of a nearby stool and apologized, to which the older gentleman replied "Oh, you're grand!" (The word "grand" makes up a larger portion of the Irish vocabulary that one might expect, causing their sentences to seem aggressively positive. I'm grand, he's grand, she's grand, it's all grand!)
He went on to ask how I was fairing. I told him I was fine and returned the nicety.
"I'm a bit drunk." he announced, matter-of-factly.
"Well that's what we come here for, isn't it?" I said, gesturing to the bar.
"Oh, you must be Polish!" I wasn't familiar with the implication, but I informed him I was American.
"Oh now," he replied sympathetically, "it's not your fault."

I and a friend of mine, Anthony, experienced a similar encounter with another older gentleman on the bus. He sat across from us, rambled incoherently about the rain for a moment and then introduced himself, shaking my friend's hand. He then asked his permission to shake his "lady's" hand. I answered for myself and clarified that he was not my boyfriend.
"Not your boyfriend! Where be your boyfriend?" I explained that I was single.
"Well, do you like him?" He asked, indicating my very gay companion.
Cue the uncomfortable laughter and attempts to wordlessly agree on how much to disclose.
A simple "no" did not satisfy the old man, who went on for the remainder of the ride about how it wouldn't be long til we were in love. I should mention that we had accidentally boarded the wrong bus and were bound to spend an hour working back around to our stop.
We accepted our fate and silently nodded as he monologued.
"...and when the baby comes its right lovely!" crooned the old man.
"Jesus Christ." muttered Anthony. 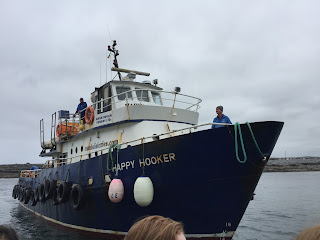 The overnight trip I attended was to the smallest of the Aran Islands, Inis Oir (pronounced "Inisheer"). I had heard a few things about the islands precedig my trip. There was talk of the famous Aran Sweater Market, where one can various winter garments handmade on the island from the wool of local sheep. Very touristy, but a worthy investment. Then there was talk of the ferry ride. Our program leader spent half of our pre-trip meeting preparing us for the treacherous waters, adding that at times the weather has
been so bad that nearly every student could be found losing their lunch over the lee rail. 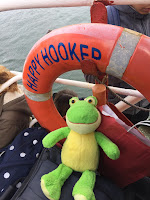 This was unacceptable for me. I had heard of a prescription-only medicated patch called Scopoderm that queasy passengers everywhere swear by. I visited a doctor, got the patches, boarded the Happy Hooker and sat tight, preparing for the worst. While my stomach remained miraculously unphased, I did find it quite terrifying to occasionally look over the side and find myself parallel with the waters below me. I decided that a sailor's life is not, in fact, for me. And to those cheering with the keels and yelling that they "could do this all day!" ...I will refrain from commenting. 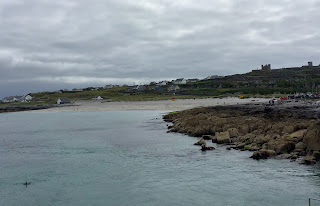 The largest tourism gimmick in Ireland is to boast of tradition. Every sign on every storefront advertises "traditional" Irish food, music, and crafts, even when the product obviously lacks tradition. It's strange to me, because in the States things are often advertised for their authenticity to a another culture, like Japanese habachi grills and German restaurants. We will occasionally brand things by their local origin, like New York cheesecake and Texas barbeque. But for the most part, we American's can't get enough of someone else's history, since we have such a brief one of our own. The Irish have figured this out. So if you find yourself craving a glimpse of the true roots of Irish culture, but not so sure you can trust the signs, get away from the pubs that stamp a clover on your Guinness and weather the ride to the islands. With the largest island populated by less than eight hundred people, the area is hardly commercialized.
The land features your usual rolling green hills, but these are covered with a web of 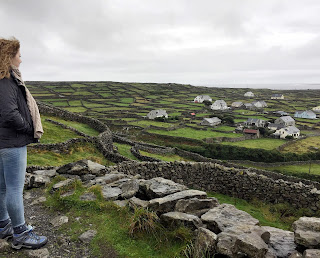 interconnected dry stone walls that stand about four feet high and date back to the second century B.C. These were built by the Celts or Proto Celts, possibly to mark property lines. The islands act as a barrier to soften the blow of the turbulent Atlantic weather on the mainland, so these walls may also have served to block some of the harsh winds. Rather than replace them, the current inhabitants continue to use the walls to house livestock. 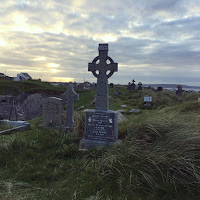 Atop the highest hills are ancient forts and castles that offer incredible views if you can manage the climb. And on Inis Oir, there is a graveyard near the beach surrounding a first century chapel that, while it may have stood above ground at one point, has been slowly buried by the ages as the sea winds blew sand against its walls. Now one must descend below the cemetery to see the crude carvings and inscriptions. (I wasn't the only one to comment that the chapel has likely been the site of many a romantic rendesvous over the generations). 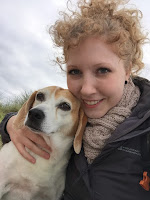 All of this history has remained virtually untouched, and is free for anyone's exploration. In addition to the artifacts themselves, the antiquated style of living that I mentioned in Limerick is much more evident on the islands. I noticed several collared dogs wandering unattended, approaching people for a petting without hesitation. After asking around I determined that while these canines have official owners, they really belong to no one. And everyone. The community is so small that all the townfolk know them by name, and they roam as they please, never wanting for food or a place to sleep. No one bats an eye when one beagle named Jenny often boards the ferry for a leisurely ride to the mainland and back. 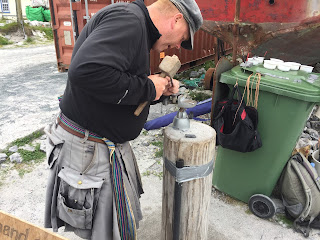 I've learned in my folklore class about the history of Irish funerary practices, and the "merry wakes" they held to honor the dead. The bigger the party, the longer the dead would be remembered. Therefore everyone in town was - and still is - invited to wakes and funerals. Yet I was still taken aback when a man selling slate carvings on the beach (and wearing what can only be described as the kilt version of cargo shorts) welcomed us to attend a funeral that night. None of the American students joined in, but from the castle ruins at sunset, we did see the procession to the church. A single hearse crawled the road along the coast, followed by a crowd of town residents on foot, burning incense and chatting. As other pedestrians or cyclists passed by, they would greet someone in the crowd and fall in step, as if a funeral sounded just grand, and they hadn't anything better to do that evening.
And they probably didn't. Life moves at a different pace in places like this. If you're ever looking for something off the beaten path, it's a sanctuary free of gaudy shamrocks with hardly a gift shop in sight. Unfortunately, while I did find a nice sweater at a local craft shop, the famous Aran Sweater Market is on another island, Inis Mor ("Inishmore"). I will be venturing there in search of souvenirs after a stop in Galway in the coming week.

Until then, make it count friends. 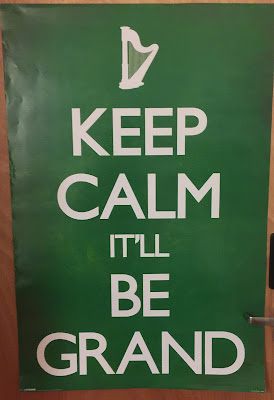